Looking at the Stars – Part 3 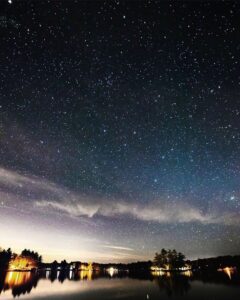 August is here at last with its fine weather, fewer mosquitos, and longer nights. All of the constellations and objects from July are still visible, but there are a few exciting new things to see this month.

Here are some astronomical highlights for August 2020:

The sun continues its apparent drop in elevation as it approaches next month’s fall equinox (equal light and dark).

For those of us relying on daylight to paddle to that distant lakeside campsite or hike that last ridge before setting up for the evening, knowing when the sun sets is important.

In August, we see a big change in the amount of daylight. The sun sets around 8:54 pm at the beginning of the month, but by month’s end, it sets almost an hour earlier at 8:05 pm.

Because of the canopy of trees surrounding most campsites, the horizon will be blocked, meaning you will lose the sun about an hour earlier. If you’re travelling around August 31, make sure you finish your hike or paddle by 7:00 pm.

This can shorten our recreation time, but from an astronomy perspective, we gain almost two more hours of darkness to appreciate the night skies. The moon has long captivated observers of all ages. August lunar phases of the moon occur as follows:

Did you know many First Nations teachings, including those of the Anishinaabe and the Haudenosaunee people, use the back of a turtle’s shell as a lunar calendar?

Jupiter and Saturn continue to be spectacular objects in the southern sky around in the late evening.

Joining them after 10 pm is the planet Mars, which is nearing its closest approach to the Earth in late September/early October. After a spectacular visit, Comet Neowise is finally disappearing on its long orbit of the sun. But the small sublimated material left behind (dust and frozen material) is still around and, perhaps in the future, the earth may run into it and see it burn up in the atmosphere as a meteor.

About a thousand years ago or so, another comet, Swift-Tuttle, made a similar visit to the sun. The earth intersects the leftover material from that comet every August and gives us the lovely display known as the Perseid meteor shower.

A meteor shower occurs when the earth enters the debris field of a comet that has long ago passed around the sun.

These bits of dust and grit, often no bigger than your thumbnail, enter the earth’s atmosphere and burn up high above the ground (see our post on meteor showers for more information).

This year, the Perseid meteor showers occur on a full moon which will render many of the fainter showers invisible. If you want to see them, the best time would be in the evening of August 11 into August 12. Featured constellations: an archer, dolphin and a goat

In this month’s featured constellations, we discuss Sagittarius, Capricornus, and Delphinus.

Looking at the Stars – Part 2

Looking at the Stars